Rural adventures in the Berkeley Vale

Our first raised beds were made from old floorboards and roof beams from some attic renovations. Oh, and the blood, sweat and tears of my husband. A random array of different shapes and sizes, they did help protect our easily compacted clay soil from too much trampling. Large amounts of well-rotted manure were added annually and a decent crop of veg ensued.

Against all the odds they lasted over five years, but by the end of last summer were starting to rot gently into the earth. It was time for a makeover.

Full of enthusiasm I pulled out the rotting wood and planned a beautiful potager style garden using a free garden planner tool at GrowVeg.com. You can see the final design here.

Doesn’t it look pretty? At this stage it felt as though the garden was as good as planted, complete with neat rows of veg and flowering rose bushes. First I planned to hire a digger to remove several trees from the beds (acorns turn into medium size oak trees surprisingly quickly), and to scrape off all the turf and create a clean canvas to work with. Luckily the very tactful digger-hire man suggested it might be as quick for him to do the job and half a day later several trees were relocated and the veg patch scraped.

Hours of internet research revealed that it really shouldn’t be too difficult to screw together some gravel boards to make the beds – certainly it would be cheaper than buying the ready-to-assemble kits. So the next step was to order wood. Local timber merchant Gap Supplies quoted a pretty reasonable £170 for the wood, all cut to size, and it was delivered a few days later.

Measuring and mapping out the beds with some lovely red string wasn’t as easy as it looked. Not only did the distances seem to alter each time I measured, then the string started to fight back, tripping me up like a giant fly in its web.

Bored with planning, I decided it was time to start building. The online videos looked easy-peasy. How hard could it be? Turns out: really hard. I managed to connect two pieces of wood using several nails and a manual screwdriver (ok, a hammer, a husband and some screws got involved too). Based on this rate of progress it was going to be several months and a divorce before the beds were built.

Realisation dawned that it was time to “get a man in”, and happily this coincided with the return from abroad from one of our chief collaborators, Craig. Armed with an electric screwdriver, a mobile workbench and cups of tea, he knocked up the remaining 9.5 raised beds in a day. The strong independent woman in me started muttering darkly about playing to our strengths and resolved to get the beds weeded and filled with earth all by herself.

*Update* – one week later, and two beds have been weeded, two barrowfuls of compost have been added. Not impressive.

The story so far 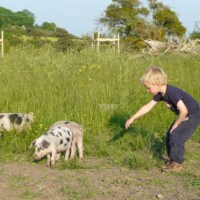